Assessment, support and treatment for people of all ages who have problems with their hearing or balance.

Our Walk-In-Repair Clinics are closed until further notice. We are sorry for any inconvenience caused.

Instead we are offering the following services:

Send your hearing aid by post with your details (name, date of birth, full address and contact telephone number) and stating what the problem or your request is.  Once the Audiologist has checked/repaired your hearing aid we will post it back to you as soon as possible.

When requesting by post we kindly ask if you could send a self-addressed envelope if possible and confirm your name, date of birth and full address. We also ask you to confirm which type of batteries you need, often orange P13, blue P675 or brown P312.

Following this we will send you a supply of batteries (quantity will depend on our stock levels).

If you or someone is able to replace tubes/slim-tubes it is preferred that we post tubing and slim tube replacements to your home address.

When requesting by post we kindly ask if you could send a self-addressed envelope (one large letter stamp).

Anna is the team leader for Adult Services in the Audiology Department at the Royal Surrey County Hospital. She obtained a BSc in Applied Biology from the University of Nottingham in 2005 and an MSc in Audiology at the University of Southampton in 2007. Following clinical training in Southampton she obtained her Certificate in Audiological Competence in 2008. In 2010 she registered with the Health Professions Council as a clinical scientist in Audiology. She then went on to complete her PhD entitled ‘Cochlear dead regions: prevalence, diagnosis and hearing aid management’ at the University of Manchester in 2013. Anna specialises in adult and balance clinics with particular interest in complex hearing clinics.

Hashir qualified as an audiologist in 2001. His PhD research was on the effect of motivational interviewing in encouraging hearing aid use which was funded by the National Institute of Health Research (NIHR). Hashir is the team leader for Tinnitus and Hyperacusis Therapy Specialist Clinic (THTSC) as well as the Research & Development lead at Audiology Department. His clinical work focuses on providing rehabilitative therapy for adults and children experiencing tinnitus and/or hyperacusis.

Francis completed his MSc in Audiology at the Institute of Sound and Vibration Research, Southampton University, in the early 1990s following his undergraduate degree in Biochemistry and Pharmacology, also undertaken in Southampton.  Over the years Francis has worked as a clinical scientist/audiologist in several hospitals in and around London (including St George’ Hospital, Tooting; Queen Mary’s Hospital, Sidcup; and the Royal National Throat Nose, & Ear Hospital, Gray’s Inn Road). Between 2003 and 2009, Francis was employed as a full-time lecturer and clinical placements’ coordinator for the MSc and BSc degree programmes at University College London.

Whilst working as a paediatric audiologist at Whipps Cross University Hospital, London (from 2010 – 2016) Francis undertook research at the Royal National Throat, Nose and Ear Hospital, London and the National Hospital of Neurology and Neurosurgery, Queen’s Square, on a part-time basis. I eventually obtained my PhD from UCL in 2017.

I have been clinical lead for paediatric audiology at the Royal Surrey County Hospital, Guildford since May 2016.  My personal areas of interest currently include Cortical Evoked Response Audiometry in infants and toddlers, and APD.

Alexandra is the team leader for Adult Rehabilitation at Ashford and St Peter’s Hospital NHS Foundation Trust. She has a special interest in rehabilitation of adult with special needs, balance diagnostics and rehabilitation.

Danielle completed her BSc Audiology degree at the University of Manchester in 2010.  She started working at Royal Surrey County Hospital straight after her degree. She is the Team Leader for the Frimley Park Hospital sites including Farnham Hospital, Fleet Hospital and Aldershot Centre for Health.  Her areas of interest are adult rehabilitation, complex adult counselling, bone anchored hearing aids and vestibular rehabilitation therapy.

Vicky is a full time audiologist based at Frimley Park Hospital. She graduated from The University of Manchester in 2011. Vicky is a specialist and lead in Bone Anchored Hearing Aids (BAHA). She specialises in vestibular diagnostics.

Nicola qualified as an Audiologist in 2004 and has been working at the Royal Surrey County Hospital since 2006. She established the Vestibular assessment and rehabilitation service at Royal Surrey County Hospital and currently has expanded this service to include paediatrics. She also does work with other physiological measures and adult hearing assessments and fittings. Nicola is the clinical training lead for Higher Training Scheme training related to vestibular assessment and management.

Rachel has been part of the audiology team since she started as a student in 2001, qualifying as an audiologist in 2004.  Since she has qualified she has gained experience in a wide range of clinical areas.  She is now part of Paediatric Audiology team based at the Royal Surrey County Hospital, specialising in diagnostic testing in young children and new-borns, including complex needs and the new-born screen clinics. Rachel has recently started a research project in the area of objective hearing testing in new-borns.

Amie completed her undergraduate degree in Medical Sciences and Humanities at Swansea University, followed by an MSc in Clinical Audiology from Southampton University. She is now also undertaking training to specialise in Diagnostic Vestibular Audiology.

Erin qualified as an audiologist in 2012 with a BSc (Hons) in Audiology from the University of Southampton. She originally specialised in adult hearing assessment and rehabilitation, and went on to successfully complete the University of Southampton’s Hearing Aid Aptitude Test in 2015. In the same year, she registered as a private hearing aid dispenser with the Health and Care Professions Council and has been working within the department’s private hearing aid service since. Erin is also a member of the paediatric audiology team and therefore splits her time covering clinics in the paediatric, adult, and private hearing aid services.

Fariba was born in Iran and completed her BSc in Audiology. She has worked in the UK for many years and joined the Royal Surrey in 2017.

Jemma qualified as an Audiologist in 2010 following completion of the BSc Audiology from University of Southampton. She joined the team at Royal Surrey in October 2011. She has since started working with the Tinnitus and Hyperacusis team from 2015 and is responsible for the tinnitus clinic at Ashford Hospital.

Jenni initially joined the team as a student during her clinical placement in 2015, she then started as an Audiologist with us after her graduation from the University of Southampton in 2016. Jenni is part of the adult rehabilitation team based at The Royal Surrey County Hospital and is beginning to specialise in Tinnitus and Hyperacusis management. She also covers clinics in Woking and Frimley Park Hospital.

Jennifer graduated from the University of Southampton with a BSc in Audiology in 2014, and has worked at the Royal Surrey County Hospital since then. She started her role in adult hearing assessment and rehabilitation before specialising in the assessment and management of Tinnitus and Hyperacusis in 2016.

Joanne qualified as an Audiologist in 2009 with a BSc from the University of Southampton. Whilst working in the department she has specialised in vestibular diagnostic assessment and rehabilitation and has been running tailored rehabilitation clinics for five years. She has been on the organisation team for numerous Royal Surrey Audiology ‘How to Manage a Dizzy Patient’ seminars since 2011.

Keith has been a dynamic member of the Audiology department. He has a special interest in hearing aid fitting. Keith spends most of his time in clinics at Haslemere Hospital.

Leah is an adult audiologist spending most of her time at the Aldershot Centre for Health. She qualified as an audiologist from the University of Southampton in 2009 and has worked for the Royal Surrey County Hospital ever since. Her clinical interests are in adult hearing rehabilitation.

Olu graduated from the University of Leeds in 2017 with a BSc (Hons) in Healthcare Science (Audiology) and has been working for the Royal Surrey since graduation. She is currently focused on adult hearing assessment and rehabilitation. Her main area of clinical interests are Cochlear Implants, BAHA and Paediatric Audiology.

Rowena qualified as an audiologist in 2016 from the University of Southampton with a BSc (Hons) in Healthcare Science (Audiology), and has since been working at the Royal Surrey County Hospital. Originally specialising in adult rehabilitation, she also started training and working as part of the Balance Team, specialising in Vestibular Rehabilitation in 2017.

Viveka qualified as an audiologist in 2009 from the University of Southampton and has since been working at Royal Surrey County Hospital. Originally specialising in adult rehabilitation, she also started training and working as part of the Tinnitus and Hyperacusis Team in 2013.

Barbara has worked for the RSCH since 2012. Her first post was within the Appointments Centre looking after the breast surgery clinic and booking appointments for all other depts. within the hospital. In August 2014 she began working as an administrator for the Audiology Dept where she has now been appointed Team Leader within adult audiology services. 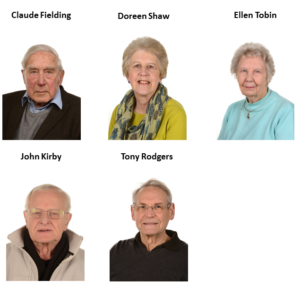 We are fortunate enough to have voluntary support on our walk-in repair clinics at Royal Surrey County Hospital. Our volunteers are trained to carry out basic repairs as well as provide general advice and support. Should a patient’s problem be more complex than this, then they are referred on to an audiologist on the same clinic.

Would you be interested in volunteering in Audiology? Do you enjoy helping others and are you confident handling your own hearing aids?

If so, please feel free to contact our volunteer lead Amie Gronow:

We welcome patients, family and friends to attend our Audiology Patient Panel Forum.

This will give you the opportunity to discuss the audiology service as a whole, to raise concerns and to share ideas on how to improve the service. We would also like to update you on the current service and future plans we have.

How to register your interest:

Please email us at:
rsc-tr.Audiology@nhs.net

Here you will find information regarding support services available in the Surrey area. These services may be able to provide you with support beyond the hearing aid services we provide in audiology.

Sensory Services by Sight for Surrey

Sensory Services by Sight for Surrey is the largest charitable organisation in Surrey working with people who are visually impaired, Deaf, Hard of Hearing or who have combined sight and hearing loss. It began to deliver services to the Deaf and Hard of Hearing in February 2016 after securing a contract by Surrey County Council to provide these services. Hearing Loss Advisors at Sensory Services can provide information and support to assist you to manage your hearing loss. The specialist team can work with individuals, families and groups providing:

There are many ways hearing loss can affect your daily life. Support from the team is available if, due to hearing loss you are:

If your hearing loss affects your work you may be entitled to an access to work grant. An Access to Work grant can pay for practical support if you have a disability, health or mental health condition to help you:
■ Start working
■ Stay in work
■ Move into self-employment or start a business

The anatomy of the ear

Overview of the Audiology referral process

We are holding a Free Health Event on Tinnitus and Hearing loss on Monday 3 February. If you would like to come along you can book places here.:

You can view our presentation handouts here.

You can also view our exhibition booklet here.

At the end of this event we will be opening up to questions. See here for Q&A instructions..

The Audiology Department is located in Outpatients 7 (Level B).